View the playbill for the Mariinsky theatre 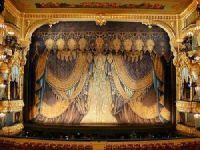 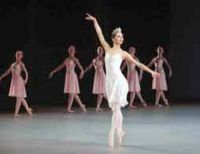 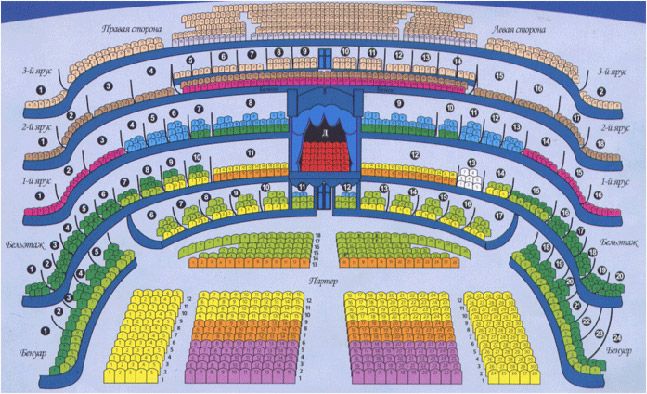 State Mariinsky Opera and Ballet Theatre (named after Russian Empress Maria - the wife of Alexander II) is considered to be the most important and most spectucalar opera and ballet stage in St.Petersburg. Actually today it is the biggest theatre in Russia due to the reconstruction of the main stage of Bolshoy theatre in Moscow which started in 2005. The Bolshoy theatre new stage functioning today has only 928 seats compared to 1625 seats in Mariinsky. In the West Mariinsky theatre is well-known under the Soviet brand name Kirov still used by the theatre during world tours due to marketing reasons.

Mariinsky theatre (according to contemporaries, "the finest theatre in Europe") was constructed in 1859 (architect Albert Cavos)Â on site of wooden Imperial Theatre-Circus destroyed in a fire one year before. Later the building was reconstructed Â by Victor Schroeter, head architect at the Department of The Imperial Theatres, who redesigned its back-stage areas. In 1896 the engineer Smirnov added new wings to the main building.

Architectural decor of the sumptuous auditorium has hardly changed since the XIX century. The ceiling painting is the work of Italian artist Enrico Franchioli. The splendid curtain, an emblem of the Mariinsky Theatre, was created by the famous Russian theater artist Aleksandr Golovin in 1914 in the heyday of Russian ballet. White sculptures, brilliant gilt, magnificent bronze chandelier and blue drapings attract attention

Mariinsky (Imperial) theater was opened Â on October, 2, Â 1860 with the performance of the opera by Michail Glinka "A Life for the Tsar". Since that time the theater is linked to the best achievements of Russian opera and ballet. Its ballet company for several years (1871-1903) was led by Maruis PetipaÂ who created the choreography for more than 50 ballets. The theater still plays his choreography versions of such classical ballets as the "Swan Lake", "Giselle", "Don Quixote" and"Nutcracker". On the stage of Mariinsky performed Â suchÂ famous dancers of that time as Wazlav Nijinsky, Anna Pavlova, Tamara Karsavina, Matilda Kshesinskaya, Olga Spesivtseva, Rudolf Nureyev, Mikhail Baryshnikov, Galina Ulanova, Natalia Dudinskaya and many others. At present days Mariinsky's world known primas are Ulyana Lopatkina and Diana Vishneva. All the above mentioned artists are the graduates of St.Petersburg Vaganova Ballet Academy.

The Mariinsky Theatre Orchestra has a long history, being, in fact, one of the oldest musical institutions in Russia. Founded in the eighteenth century during the reign of Peter the Great, before the Revolution it was known as the Orchestra of the Russian Imperial Opera. Based since 1860 in the Mariinsky Theater in St. Petersburg, the orchestra had its golden age in the second half of the XIX century under the musical direction of Eduard Napravnik, who assumed the overall direction of the Imperial Theater for over 50 years (1863-1916 ) and under whose leadership the orchestra has been recognized as one of the best in Europe. Napravnik also contributed a lot to the creation of a Russian generation of outstanding orchestra directors that evolved into what later became known as "the Russian school of direction."

Mariinsky Theater was also the birthplace of numerous operas and ballets regarded as masterpieces of the XIX and XX centuries: "A Life for the Tsar" and "Ruslan and Ludmila" by Glinka, Borodin's "Prince Igor","Boris Godunov" and "Khovanshchina" of Moussorgsky, "The Maid of Pskov","The Snow Maiden" and "The Legend of the Invisible City of Kitezh" by Rimsky-Korsakov, "The Queen of Spades", "Iolanta", "Swan Lake","Nutcracker" and "Sleeping Beauty" by Tchaikovsky, Shostakovich's operas and ballets of Khachaturian.

Pyotr Ilyich Tchaikovsky was also closely linked to the Mariinski Theater. He not only led the orchestra but also premiered his Fifth Symphony, Hamlet's Fantasy Overture and the Sixth Symphony. Also, Sergei Rachmaninov conducted the orchestra on numerous occasions, debuting his Spring Cantata and the symphonic poem "The Bells", and the young Igor Stravinsky premiered here the music of his "Scherzo Fantastique" and the ballet "The Firebird".

Throughout the history of Mariinsky Theater the number of well known composers presented on its stage their treasures themselves: Giuseppe Verdi (in 1862) presented his world premiere of "La forza del destino", Richard Wagner - Â the Russian premiere of his cycle "Ring of the Rhine", "Tristan and Isolde" and"Parsifal".

During the Soviet era, under the name of the Kirov Theater, the orchestra continued to maintain their high quality under the direction of Yuri Temirkanov and Yevgeny Mravinsky. In 1988, Valery Gergiev was appointed Artistic director of the Opera company of Mariinsky and in 1996 Â he also got the position of Artistic director of the entire Theater. Under nis leadership, the Mariinsky Theater has established relationships with the largest opera houses in the world, including the Metropolitan Opera House, The Royal Opera House Covent Garden, the San Francisco Opera, the Theatre Chatelet in Paris and La Scala in Milan. Besides the extensive world tours with Mariinsky Opera and Ballet companies, the Orchestra on his own also is performed all over the world, being regarded one of the most prestigious. The continuing success of the these tours has earned it a reputation of Â "the first global orchestra in the world" as one journalist called Mariinsky Orchestra.

Any opera or ballet performance in Mariinsky is a real excitement that you will never forget. The hall is magnificent, the seats are very comfortable, the acoustics is excellent, the atmosphere in the theatre is "really something", the prices are not cheap but quite low if you compare them to what you have to pay for the same performance of Mariinsky in the West.

If you are looking for a great selection of places to stay with discount prices, visit
Hotel Reservation in St. Petersburg for more information.